Hello lovely friends! I just arrived home yesterday evening from my first ever trip outside of Canada. Simon and I went to Meliá las Dunas, a gorgeous all-inclusive resort in Cayo Santa María, Cuba. It was Simon's first time leaving Canada, too. We chose Cuba for our first trip since we heard it was safe, and very beautiful. We had a SPECTACULAR time. It was a much needed peaceful break from our busy lives. The wifi in Cuba isn't very good, and I did not get a data plan with my phone so it was a nice break from social media as well. Sometimes it's good to completely disconnect! 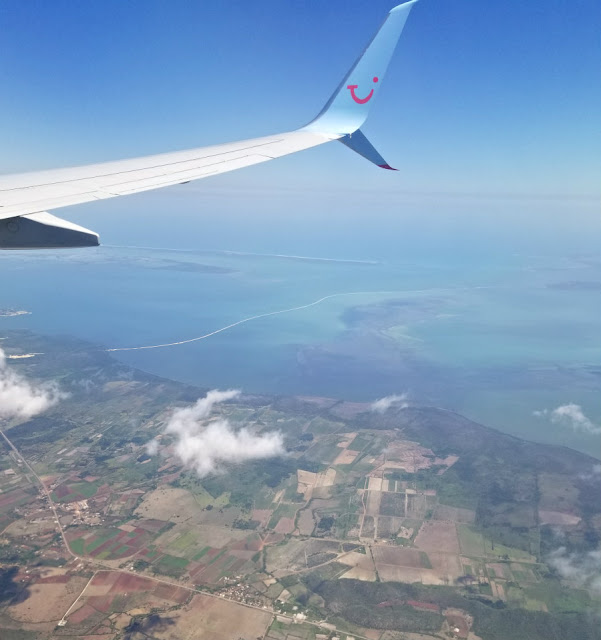 Cayo Santa María is an island separated mainland Cuba. Here you can faintly see El Pedraplén, the highway across the Atlantic ocean that connects Cayo Santa María to the mainland. It is 57.3 km long and really fun to travel across! 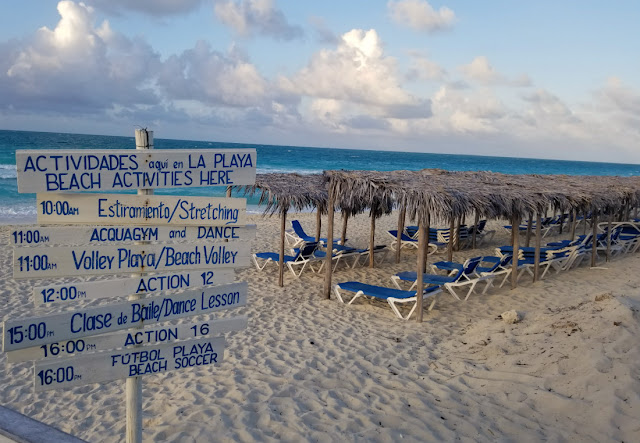 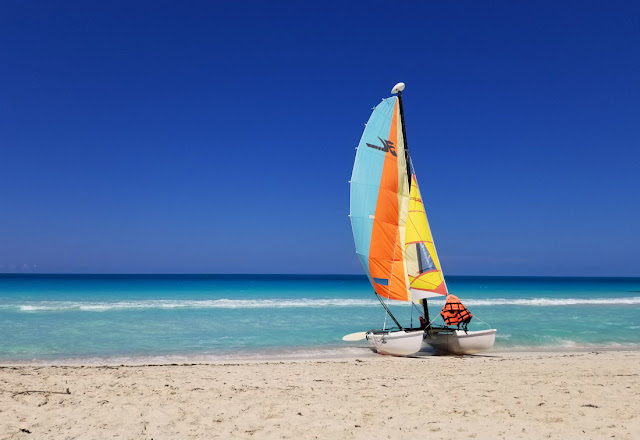 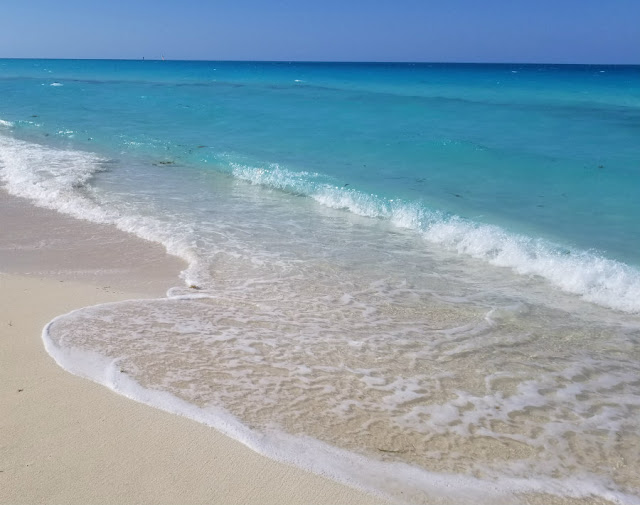 The beach was beyond beautiful. We have some nice beaches in Ontario, but nothing beats the ocean. 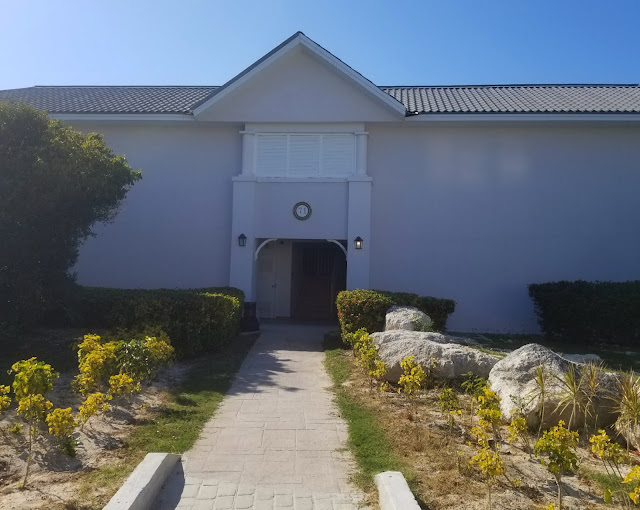 We stayed in building 71 of the resort. I really liked the way Meliá las Dunas is set out. There are two separate sections, one for adults only, and the other for families. There are multiple small buildings each containing two dozen rooms, so you don't feel like everyone is all crowded together. The hotel is pretty quiet as well, definitely not a "spring-break party" type of resort, which we really did not want. 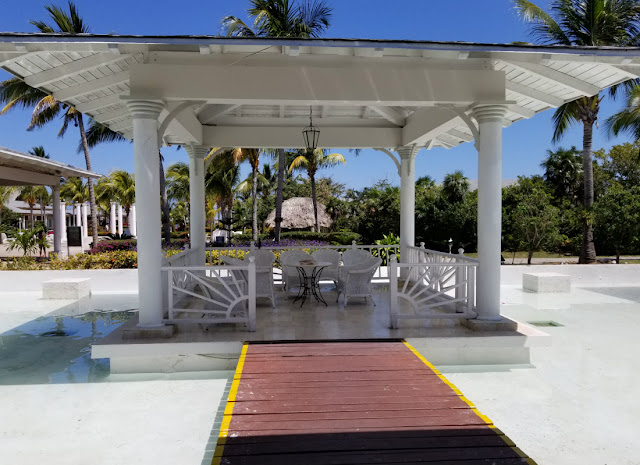 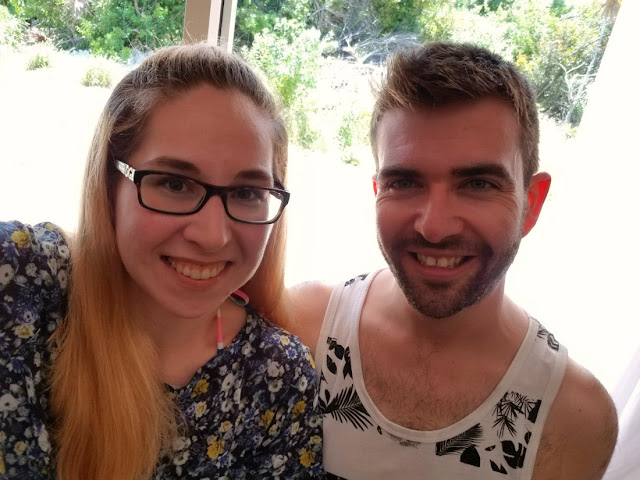 We got a bit tanned and a bit sunburned... oops! 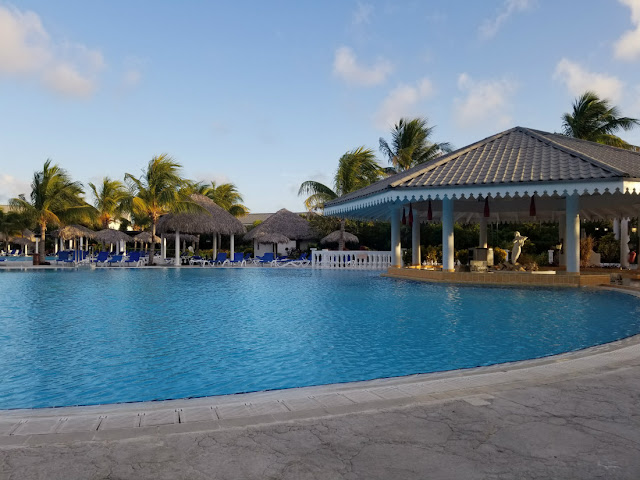 The resort has a separate pool for adults only, connected to a bar. There are bar stools under the water! 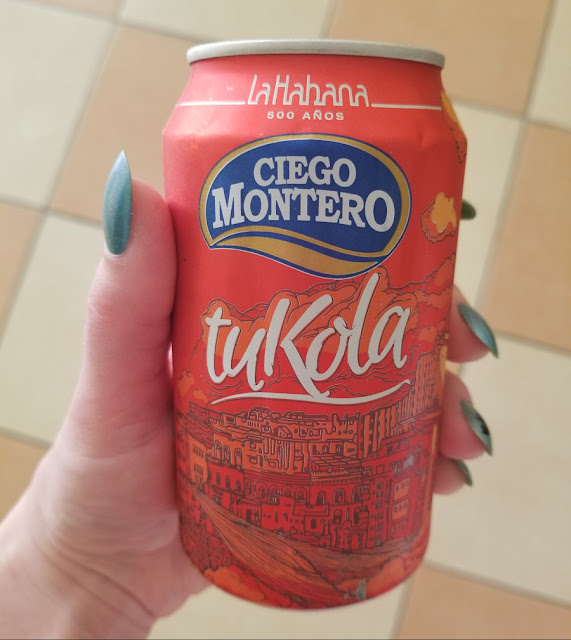 Cuban cola-this stuff is really good! It contains much less sugar than colas in Canada. 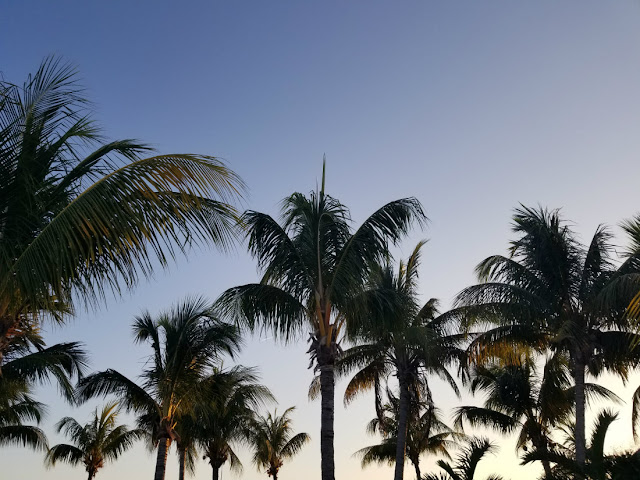 This is my favorite photo from the trip. I was so excited to see palm trees in person. I took this photo at dusk, and something about it is so dreamy. 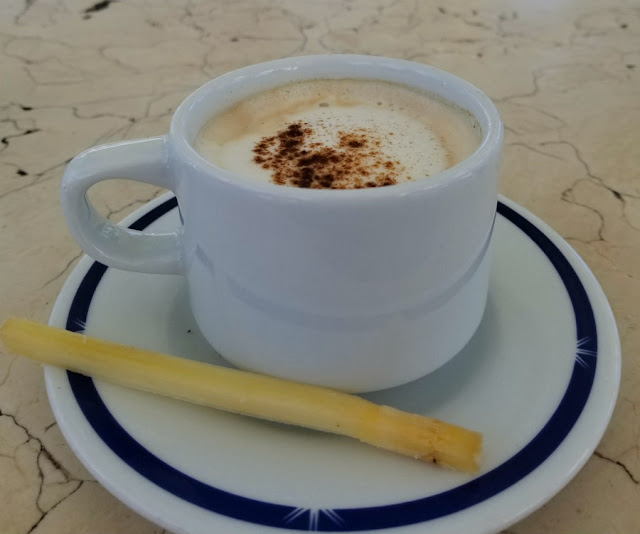 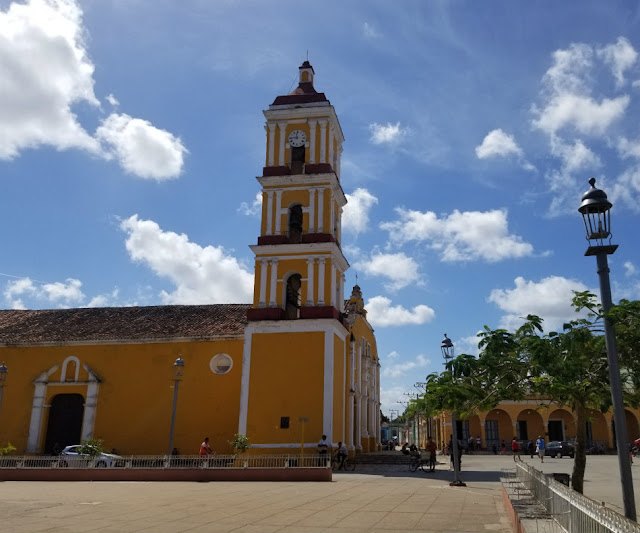 We went on an excursion to Remedios, a colonial town located close to the northern coast of the mainland. This town has 2 churches located in it's main square. Here is the Igesia Mayor of San Juan Bautista which is known for it's gold altars in the next photo. 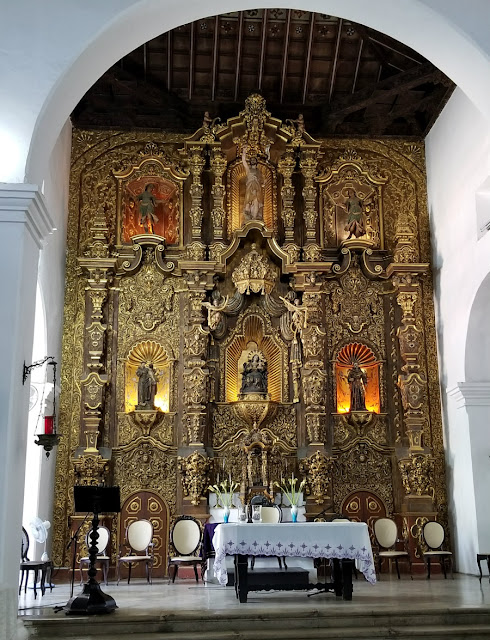 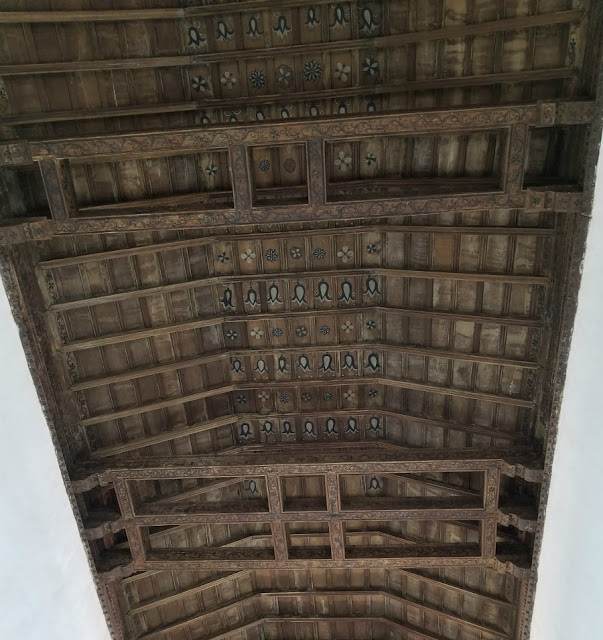 Here is some detailing from the ceiling, made of mahogany wood. 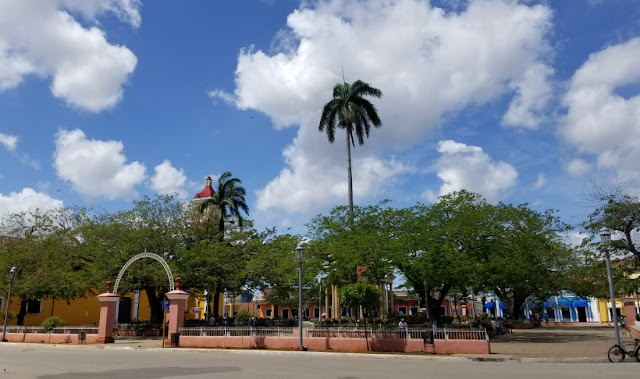 Here is the parque Martí in the central square. The Igesia Mayor of San Juan Bautista is on the left, mostly hidden by trees. 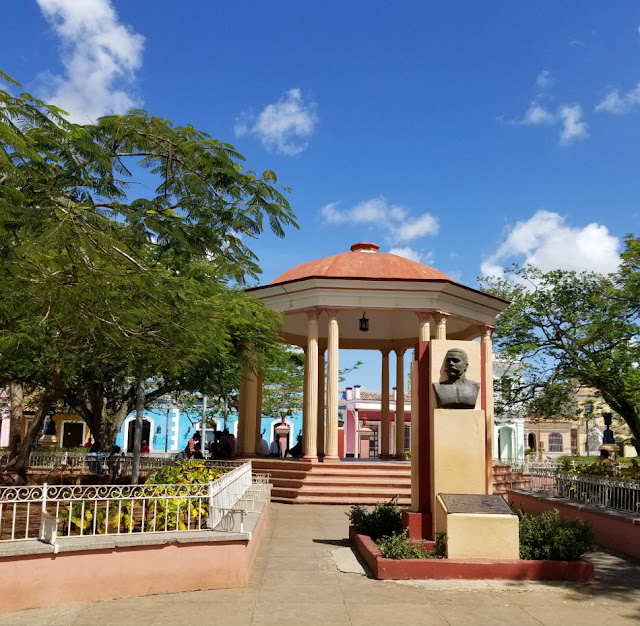 The bust of Jose Martí, a national hero. 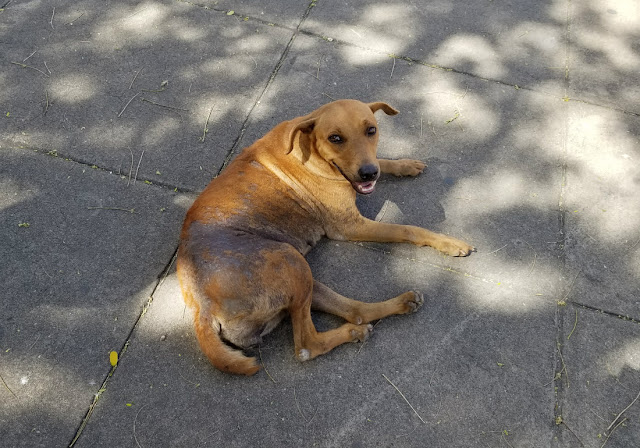 A stray doggo in the park. The strays are fed by locals so it's not as bad as it sounds. 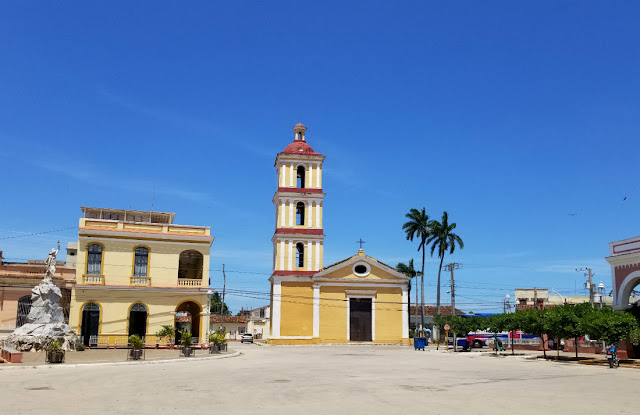 Above is the second church in the Remedios central square: Iglesia del Buen Viaje. According to a legend, some travelers brought a statue of the Virgin they found at sea to a black man living at a house where the church is currently located. The man gave the Virgin to the church the next day, but somehow the Virgin kept coming back to the man's house by itself. The people in the town decided to build a second church on the location of the man's house because of this. 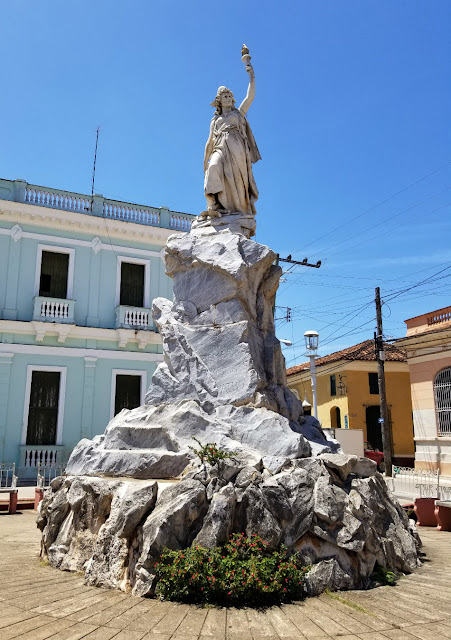 Remedios even has it's own Statue of Liberty! 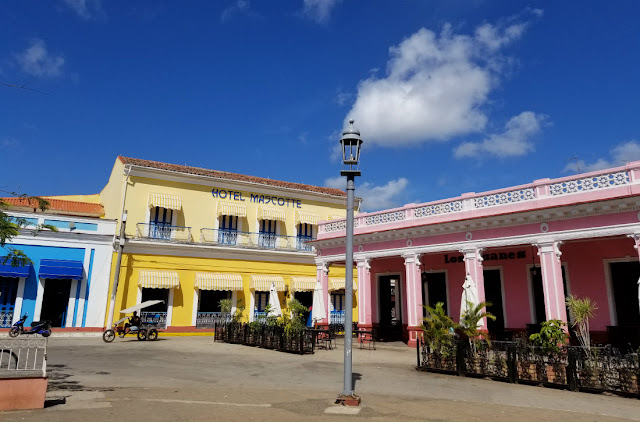 On the left you can see a bicitaxi. Because Remidios is a 16th century town, many roads are too narrow for cars to pass. Bicycles and horses must be used to get around. We had a ride on a bicitaxi and it was quite fun. 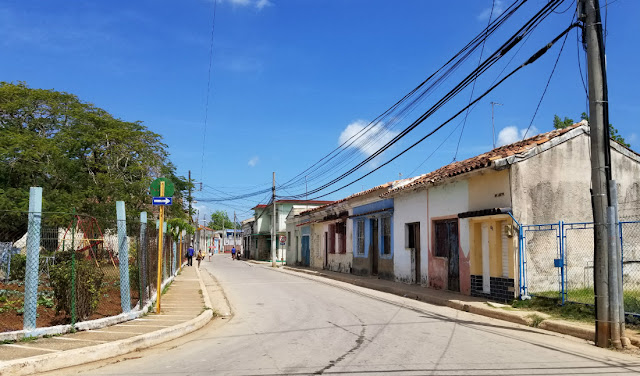 Here is a street we passed during our bicitaxi ride.

We weren't the bravest and spent most of our time on the resort except for our short excursion to Remedios. In the future, we would love to visit more towns to get a more cultural experience. The Cubans are some of the friendliest people ever, and that's coming from a Canadian ;)

Where are you traveling to next? Thanks for reading! xo

Posted by Ms Meatballhead at 16:20 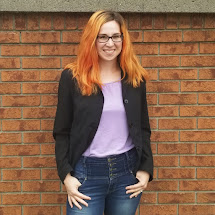